The latest data from NASA’s Gravity Recovery and Climate Experiment (GRACE) satellites has revealed that 21 of the world's largest aquifers in locations from India to China and Australia have passed their sustainability tipping points. Meaning more water is removed than replaced during a decade long study 2003-2013.
http://onlinelibrary.wiley.com/doi/10.1002/2015WR017351/full
Included in the list is the Canning aquifer which extends from North of Broome, down to Port Headland and 1000 kilometres inland.
There is not an infinite water supply said NASA’s senior water scientist Jay Famiglietti.
Groundwater basins in distress in USA and Canada and throughout the world. http://go.nasa.gov/1HRoYZs

Over 1.2 million people are in need of food assistance in Indonesia as a drought-related food crisis has been affecting most of the country since August 2015.

http://reliefweb.int/report/indonesia/indonesia-drought-briefing-note-15-march-2016
Posted by Unknown at 6:35 AM No comments:

Vietnam hit by worst drought in nearly a century.

Months of below-average rainfall have conspired to produce the worst drought in Vietnam in the best part of 100 years. 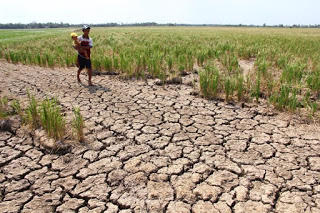 Vietnam has suffered $6.7 billion in damage from its 2016 drought, which has hit farmers especially hard in the crucial southern Mekong Delta. This cost is approximately 4% of Vietnam's GDP, and beats the $785 million cost (2009 USD) of Typhoon Ketsana of September 28, 2009 for most expensive disaster in their history. In this image, we see a boy holding his brother walking across a drought-hit rice field in Long Phu district, southern delta province of Soc Trang on March 2, 2016.
Here are the nations that have set records in February 2016 for their most expensive weather-related natural disaster in history.